The San Francisco Board of Supervisors has voted unanimously in favor of the Retail Workers Bill of Rights.

This groundbreaking labor policy contains five provisions in two pieces of legislation to protect hourly workers in our city’s chain stores and restaurants:

Require formula retail employers to provide two to four hours of pay to an employee at his/her regular rate of pay when she/he is required to be “on-call” for a specified shift but the employer cancels the shift with less than 24 hours’ notice.

Prohibit formula retail employers from discriminating against an employee with respect to their rate of pay, access to employer-provided paid and unpaid time off, or access to promotion opportunities.

Protect workers against losing their jobs when their company is bought or sold by requiring that if formula retail businesses are acquired, the workers must be kept on at their jobs for at least a 90-day trial period.

The Retail Workers Bill of Rights is focused on the largest, most profitable retailers operating in San Francisco. It will only apply to businesses with 20 or more locations globally and 20 or more employees in San Francisco, which captures the vast majority of establishments that fall under the city’s “formula retail” definition.

Under San Francisco law, chain stores are categorized as “formula retail” if they have 11 or more locations, which covers big box stores such as Target and Lowe’s, fast food franchises like McDonald’s and Taco Bell, chain restaurants such as Olive Garden and Cheesecake Factory, fashion retailers like the Gap and H&M, grocery stores like Trader Joe’s and Whole Foods, and other corporate businesses. You can learn more about formula retail here. 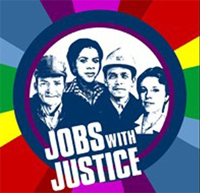 A campaign of Jobs With Justice San Francisco.

Alliance of Californians for Community Empowerment

Coleman Advocates for Children and Youth

Restaurant Opportunity Center of the Bay